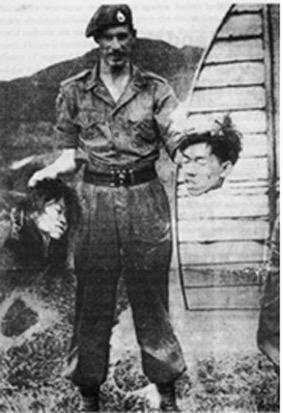 A British soldier holding the heads of his victims.

The British ‘left’ champion what they call the ‘Spirit of’ 45‘. The time that the Labour government of Clement Attlee came to power. His social reforms are celebrated, the NHS, the welfare state etc. A good ‘old Labour’ man they’ll proclaim.

What is interesting and is certainly a reflection of how the British ‘left’ carry on today is that they ignore successive genocidal campaigns, and how the British economy is reliant on imperialism. Essentially its beating heart.

The ‘Malayan Emergency’ as its known was secretly described by the British Foreign Office to be “in defence of the rubber industry”. The British used terms like ’emergency’, ‘troubles’, ‘crisis’, ‘mandate’ to describe their colonial wars after WW2. By refusing to call them wars Britain was rationalising their illegitimate actions. The same way Tony Blair used humanitarianism and  ‘weapons of mass destruction’ for his wars, Attlee and his government used ‘communism’ as an excuse for their bloodletting.

Between 1948-1960 the British Army used a wide range of brutal measures. They used herbicides and defoliants to destroy crops and trees, a virtually identical composition to Agent Orange that was used in Vietnam. In fact the United States drew lessons from Britain’s use of it. Collective punishment was wide spread. Curfews were in place, schools closed, hundreds of thousands swept into prison and labour camps, where they were punished with food reduction. The hacking of heads, limbs and ears was the norm. Used to confirm a kill rather than having to lug back the body of person they had just murdered, a body part would suffice. Several photos exist of British soldiers proudly posing with the heads of their victims. The Batang Kali massacre of 1948 for instance saw the British Army slaughter twenty-four people, before burning their village. All of this to drain the country of its wealth to benefit Britain and fund Attlee’s social reforms.

Attlee’s legacy is one of pushing the burden of Britain’s post-war economy issues onto those living in British colonies.