The BBC has called on Iranians not to vote for certain candidates in the Iranian elections which are to be held on February 26th 2016 [1]. Ayatollah Khamenei has said “the English miss interfering in the affairs of Iran” [2]. An Iranian military commander has accused the BBC of “brazen interference” in Iran’s domestic issues [3]. Sadeq Larijani, the Chief Justice of Iran, has spoke of a plot by Britain to undermine the upcoming polls, he went on to say “our people are vigilant, alive and wise and are able to recognise attempts to skew [the polls]” [4].

This is not the first time the British media has interfered with Iranian affairs. The BBC was used by the British Gov. to send coded messages to let the Shah of Iran know that they were overthrowing democratically elected Mohammad Mosaddegh. The signal for the coup in 1953 had been arranged with the BBC. They agreed to begin the Persian language news broadcast with “it is now exactly midnight” instead of the usual “it is now midnight in London” [5]. 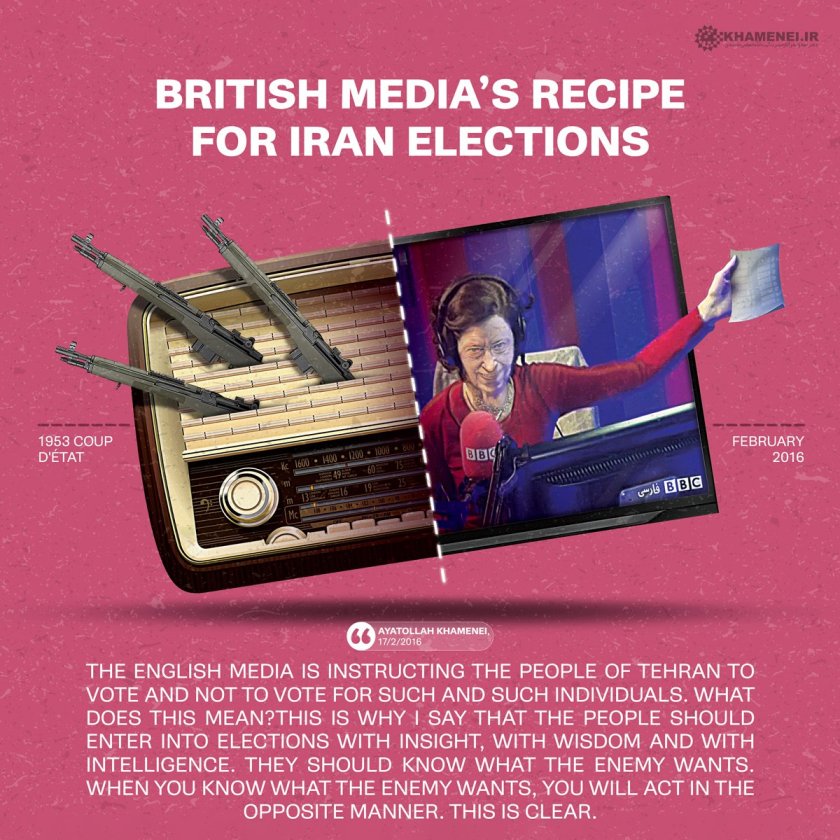 “The English media are instructing the people of Tehran to vote and not to vote for such and such individuals. What does this mean? The English miss interfering in the affairs of Iran. There was one day when the country’s king used to call for the ambassador of England when he wanted to make an important decision. He used to ask him to do or not to do such and such a thing. One day, it was the English who interfered in the affairs of the country, one day it was the Americans and one day, it was both of them.” – Ayatollah Khamenei [7]

3 thoughts on “Britain, the BBC and their war on Iran”