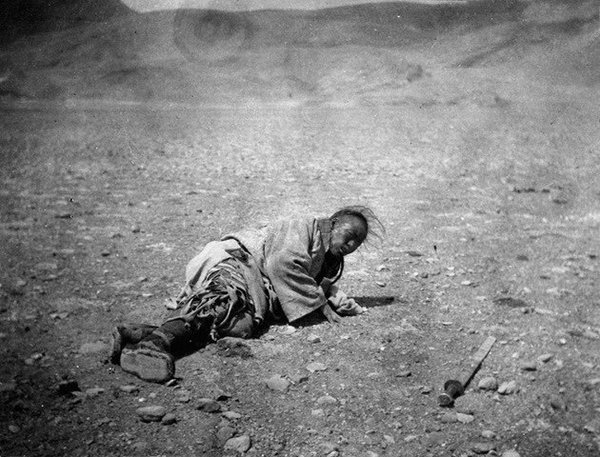 On March 31 1904 hundreds of Tibetans were slaughtered by the British with maxim machine guns. The order from the British was “to make as big a bag as possible” [i]. The day after the massacre Colonel Younghusband who led the British invasion into Tibet stated “I trust the tremendous punishment they have received will prevent further fighting, and induce them at last to negotiate” [ii]. 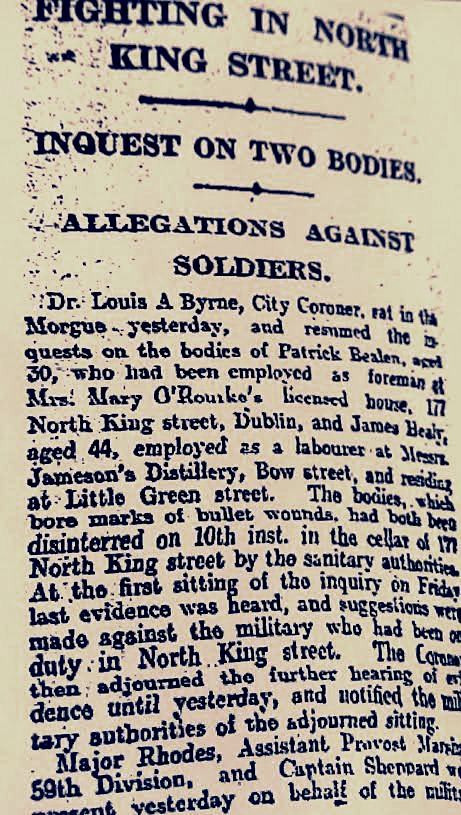 At least seventeen civilians were shot and bayoneted to death by the British Army who went on a murderous rampage on North King Street and its environs.

British troops broke into the homes of locals, accused innocent people of being ‘rebels’ and murdered them. Some of the victims were buried in their gardens and cellars by the soldiers. A military inquest into the killings found that the British Army had killed civilians but army officers and civil servants covered up the findings to avoid what they called “hostile propaganda” [iii].

Top Home Office official, ‘Sir’ Edward Troup, marked the memo he wrote for British PM Asquith “very confidential” and said some of the people were “probably fighting or sniping”, he went on to admit that there was “little doubt that others were not taking any active part” [iv].

Troup strongly advised against publishing the evidence on the grounds it would show the extent of British tyranny in Ireland. He said “nothing but harm could come of any public inquiry that would draw further attention to the matter”. He went on to state that if the massacre had happened in England that “the right course would be to refer the cases to the Director of Public Prosecutions”. But because it was Ireland, instead of the soldiers facing trail for murder, they were simply allowed to get away with it. [v] 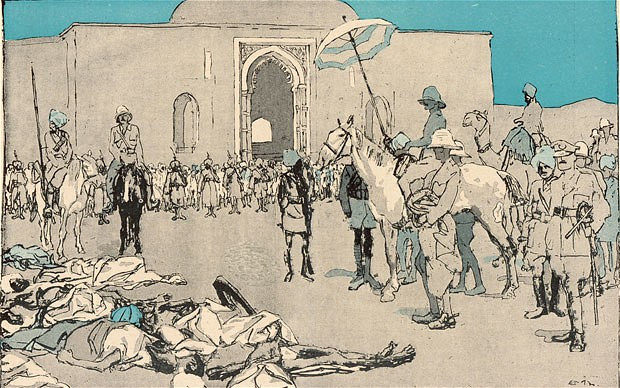 In Amritsar on the 13th April British troops under the command of General Dyer fired in to a crowd who had gathered at the Jallianwala Bagh public gardens for 10 minutes. Fire was directed towards to the few open gates through which people were trying to flee.

Reginald Dyer who ordered the massacre was hailed a hero in Britain. He was rewarded the equivalent of £1million, given a heroes welcome when he returned to London and was presented with a sword inscribed with the motto “the saviour of Punjab”. [vi]

Over 1000 people were killed. Although the British continue to arrogantly dispute the figure, claiming it to be in the hundreds as if that would absorb them of the crime. 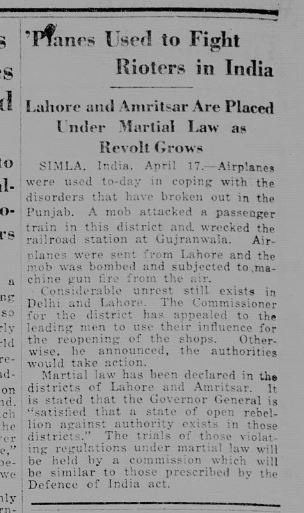 Two days after the massacre at Amritsar, the RAF were dispatched to bomb and machine gun people protesting against it in Gujranwala. At least 12 people were killed.

The Officer Commanding the RAF in India stated after the massacre:

“I think we can fairly claim to have been of great use in the late riots, particularly at Gujranwala, where the crowd when looking at its nastiest was absolutely dispersed by a machine using bombs and Lewis guns.” –  Brigadier General N D K MacEwen [vii] 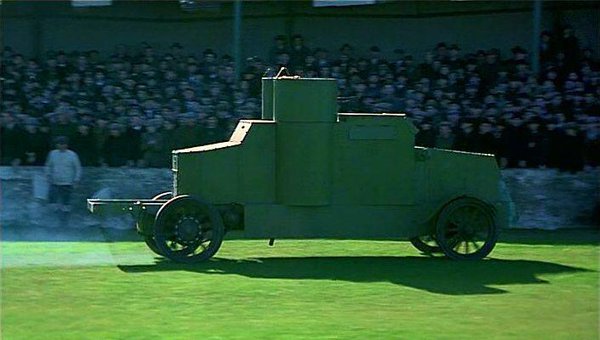 On the 21 November 1919, British forces opened fire on a crowd at a Gaelic football match in a revenge attack. The ground became a war zone as the British fired indiscriminately. 14 were killed.

Churchill would go on to proclaim that these very same British forces were”gallant and honourable officers”. [viii] 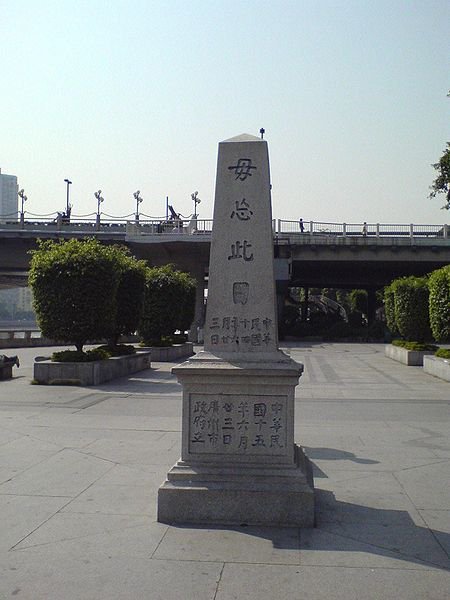 On June 23rd 1925 a group of Chinese workers and students in Guangzhou demonstrated, the British military police answered with fire. 52 died. Upon hearing of the massacre workers in Hong Kong responded with a General Strike. A boycott on British goods was declared. 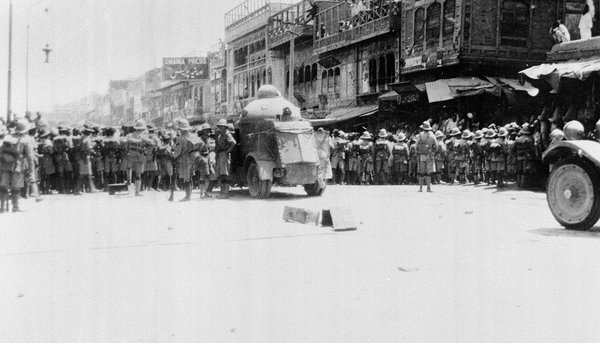 On April 23rd 1930, British troops stormed Peshawar to suppress non-violent demonstrators who were protesting the arrest of Ghaffar Khan. As troops moved into the Bazaar, British armoured cars drove into the square at high-speed, killing several people. The crowd however continued their non-violent protest, and offered to disperse if they could gather their dead and injured, and if the British left the square. The Brits refused to leave, and it was ordered for them to open fire with machine guns on the unarmed crowd.

Almost 400 were gunned down by British forces at the Qissa Khwani Bazaar (the Storytellers market). 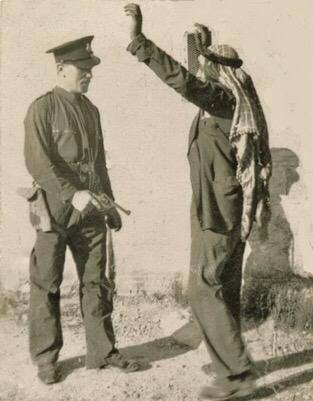 The British killed at least twenty Palestinian villagers at al-Bassa in September 1938, during an operation in which they were also tortured.

Some 50 Palestinian men rounded up by British soldiers who then put around twenty on to a bus which was then forced to drive over a landmine.

Harry Arrigonie, a British colonial policeman recalled the massacre in his memoirs:

“Villagers who panicked and tried to escape were shot. The driver of the bus was forced to drive along the road, over a land mine buried by the soldiers. This second mine was much more powerful than the ﬁrst [i.e., the rebels’ mine] and it completely destroyed the bus, scattering the maimed and mutilated bodies of the men on board everywhere. The villagers were then forced to dig a pit, collect the bodies, and throw them unceremoniously into it”. [ix] 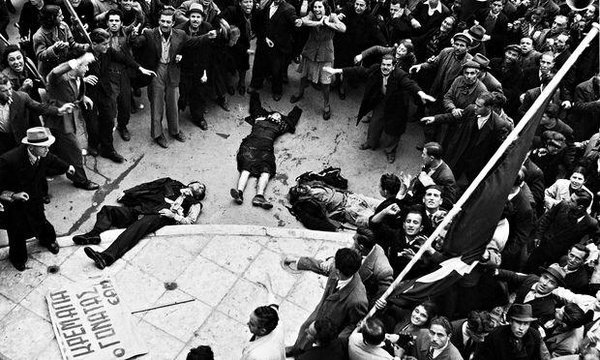 The British Army under the guidance of Churchill perpetrated a massacre on the streets of Athens in the month of December 1944. 28 protesters were shot dead, a further 128 injured.

The British demanded the that all guerrilla groups should disarm on the 2nd December 1944. The following day 200,000 marched against these demands, and this is when the British Army under Churchill’s orders turned their guns on the people. Churchill regarded ELAS (Greek People’s Liberation Army) and EAM (National Liberation Front) as “miserable banditti”, these were the very people who ran the Nazis out. His actions in the month of December were purely out of his hatred and paranoia for communism. 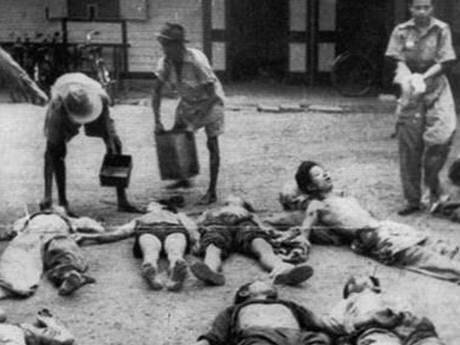 The Batang Kali massacre was the killing of 24 villagers by British troops during the so-called ‘Malayan Emergency’. A conflict the British secretly described as the “defence of the rubber industry”. Despite several investigations into the murders no charges have been brought against any of the perpetrators. In 2015, the British decided that there would be no inquiry into the massacre because it was “too long ago”. [x] 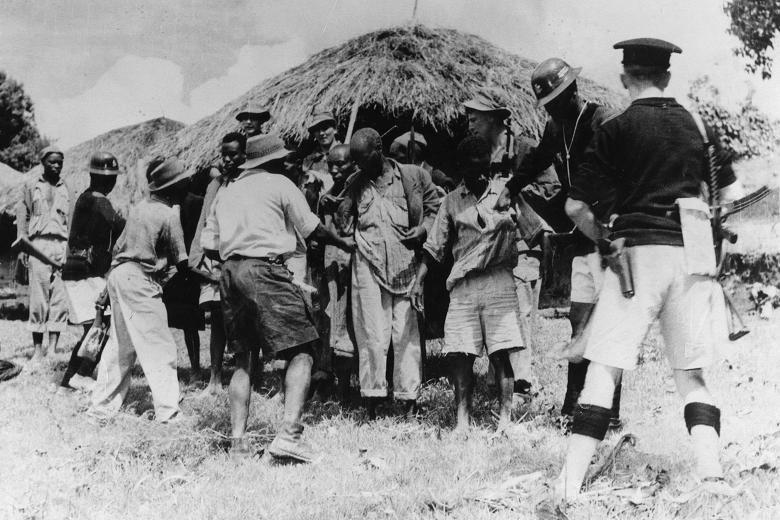 22 unarmed people were murdered by the British Army’s King’s African Rifles in the Kenyan village of Chuka in June 1953.

The British Ministry of Defence in 2006 refused to release files relating to the massacre. [xi] There is no doubt this is just the tip of the iceberg when it comes to British colonial terror throughout the so-called emergency. 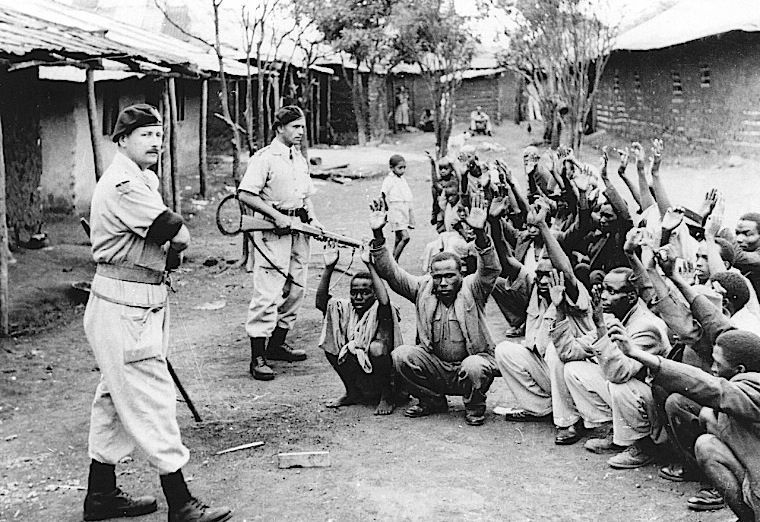 11 Kenyans were clubbed to death by British colonial guards in the Hola ‘detention camp’. 150,000 men, women and children were forced into these camps. Rape, castration, cigarettes, electric shocks and fire all used by the British to torture the Kenyan people.

The Cowan Plan advocated the use of force and sometimes death against Kenyan POWs who refused to work.

A cover up followed where the British tried to blame “contaminated water for their deaths. [xii] 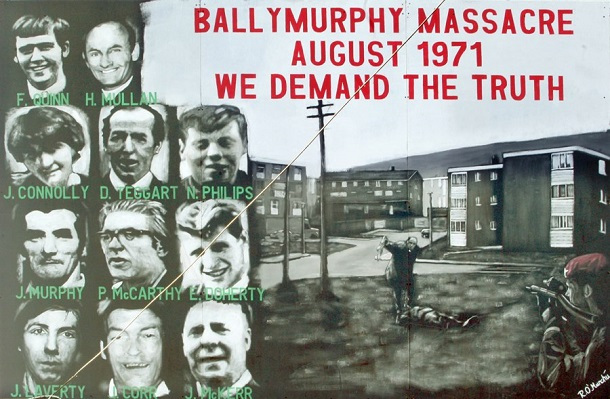 The Ballymurphy Massacre saw the British Army murder 11 civilians in cold blood over a 36 hour period.

On Monday 9th August 1971 internment without trial was introduced by the British government in the North of Ireland. Over 600 British soldiers entered the Ballymurphy area of West Belfast, raiding homes and rounding up men. Young and old were shot and beaten as they were dragged from their homes.

All 11 of the unarmed civilians were murdered by the British Army’s Parachute Regiment who would go on to carry out more massacres in the North of Ireland. 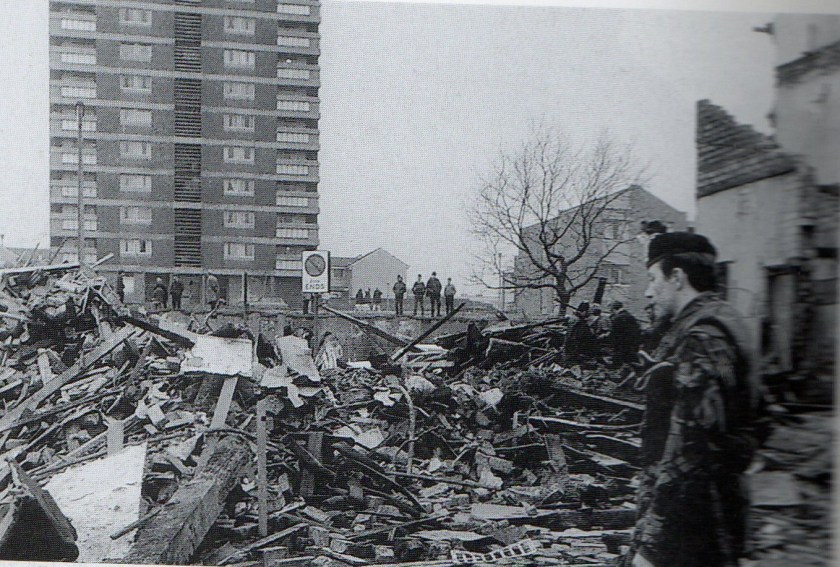 On the evening of Saturday 4th December 1971 a loyalist terror outfit known as the UVF directed by the British military planted a no-warning bomb on the doorstep of a family run pub in Belfast, Ireland. 15 people in total were killed including two children. 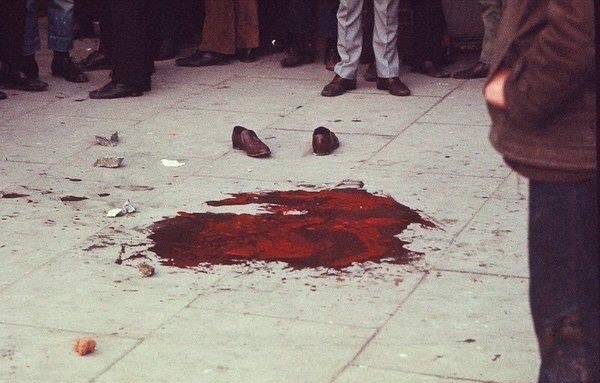 On the 30th January 1972 14 unarmed civilians shot dead by the British Army on the streets of the Irish city of Derry. Shortly after the massacre the Queen decorated Derek Wilford who commanded the Parachute Regiment and went on to give honours to Mike Jackson who spread lies about the victims.

On the 9th July 1972, 5 people were shot dead by British Army snipers in the Springhill estate in Belfast, Ireland. Three were civilians, including a priest. The two others were members of Fianna Eireann, an Irish revolutionary youth organisation. 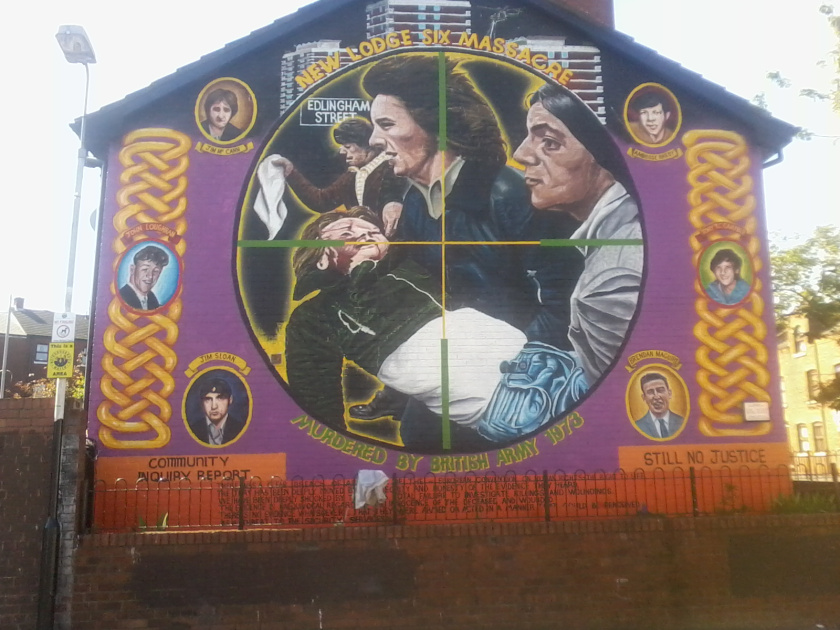 On the night and early morning of the 3rd and 4th of February 1973, six young local men from the New Lodge Road area of North Belfast were shot dead in a coordinated attackby the British Army and a loyalist death squad. 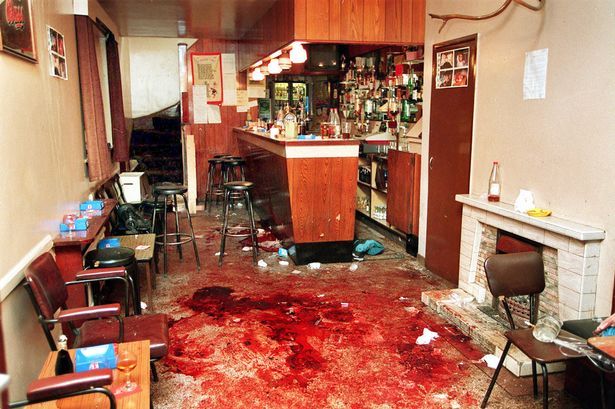 On the 18th June 1994 in the village of Loughinisland members of the British backed terror outfit the UVF burst into a pub with assault rifles and fired on customers. Six people were killed.

Britain overtly and covertly colluded with death squads in Ireland. The British funded report that was released in June 2016 couldn’t conceal this fact any longer.

[xi] ‘MOD refusing to release file on massacre of Kenyans’, Telegraph newspaper, Accessed on 12/06/2016 at: http://www.telegraph.co.uk/news/uknews/1523502/MoD-refusing-to-release-file-on-massacre-of-Kenyans.html

4 thoughts on “British massacres of the 20th century”